The Precious Sister of The Villainous Grand Duke 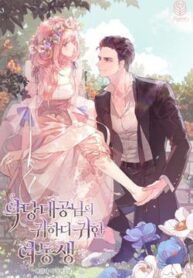 She was reborn in the war novel as the sister of the villain who had never shed blood nor tears. The person acting as my ‘brother’ was a villain who, after losing the war, would be sealed away by the male lead. So all I have to do now is pretend to be his sister until he later disappears. Or so I thought… [i]‘What’s that in your hand? Don’t tell me that’s the male lead’s head?’[/i] My brother won the war. *** “What’s with that suitcase?” “Huh?” Dietrich’s fingers tighten on the luggage that I had packed as soon as he left for war. “I asked you what this is.” “It-It’s a travel suitcase, brother.” “You want to travel? Alone?” Dietrich’s dark eyes sparked with violence. Having recently returned from war victorious, he sure smelled like a bloodthirsty killer. “And leave me behind?”

The Predatory Marriage Between the King and the Paladin

This Girl is a Little Wild